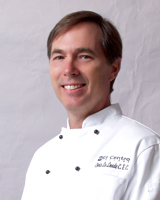 Born in Maryland but raised most of his life in central Florida, Chef LaLonde, like many teenagers got his first taste of the food business at a fast food drive-in in Lakeland, Florida that was named Whataburger. This unit was a real drive-in with curb service, counter service, and a dining room, quite a bit different than today’s Whataburger. This fry cook’s job only lasted until a better paying job came along in a department store. Years later, after beginning as a Marine Biology major, Chef LaLonde got his degree in Hotel and Restaurant Management from Florida State University and began working at Sheraton Hotel Corporation in front of the house management. It wasn’t until one day when they were desperately short in the hotel’s main kitchen, when he helped out for several days, did Chef Chris consider a career as an Executive Chef. After completing a European-style apprenticeship program and working his way up for twelve years, did that goal become a reality at the Westin Galleria in Dallas. Coming from a food family, where his mom cooked every day, his grandmother owned a restaurant in Washington D.C., and his great grandmother invented Thousand Island dressing, it was a seemingly natural career to end up in. Chef LaLonde’s next career move took him to El Centro College as a culinary instructor. He is still enjoying teaching there, where he can give back to aspiring culinarians all the knowledge and experience that he was given over the years. While classically trained, the hotel business gave him exposure to many cuisines and styles of cooking that he still enjoys sharing today. When often asked what is his specialty or his favorite type of cooking is, he will usually respond with Italian as a cuisine and charcuterie, curing and preserving, as his answer. He is excited to join Just Eats and begin the next chapter in his life-long journey in the food industry.